Based On A True Story

Once upon a time there was a beautiful princess. As befitting a princess, she lived a life of leisure.
She awoke approximately at noon each day, drank copious amounts of Diet Coke, ate a breakfast of whatever was handy, and then proceeded to play video games until the moon rose in the sky and the need for food, or booze, or marijuana, or what-have-you, drove her from her palatial apartment and out into the streets with her other (less) royal merrymaking friends.

There they flitted from pub to pub, sharing stories, quaffing ales and spirits, dancing and falling, singing and puking until the sun threatened the night and it was time to return.

And this was how her life went, give or take some studying here and there for her royal degree.

Among her royal merrymakers, there was a handsome and charming commoner. Quick with a joke and a laugh, he befriended the princess. And her suitor, the duke. The duke came from a wealthy family, known far and wide for their taste and generosity. He was a fine duke and a good man, and he treated the princess with respect and dignity.

The handsome and charming commoner took to living in the castle of the princess and the duke. He became close friends with both of them.

And here is where our story turns. For the commoner loved the duke and so gave him his love where he could. They laughed at the mummers farce known as the Simpsons, walked to the great bizarre called Harvard Square, drank Heffenreffer Private Stock (The Malt Liquor with the Imported Taste) as a point of pride, and it was good. But while the commoner loved the duke, he was in love with the princess. Of course. She was a princess, after all. But that love was not to be. And befitting his place, he knew this, and did not despair, but rather lived in the glow of the royal couple, happy to play their fool. He was really good at playing that fool. He could fool the shit out of whatever needed fooling. He even fooled himself, from time to time.

The duke was good and faithful. Emotionally unavailable at times, but still, very nice. Also smart. Really smart. And the princess loved him.  Here and there, the relationship lacked passion, and there was an occasional misunderstanding of need, and perhaps a smidgen of different priorities, but what relationship doesn't suffer from these things, from time to time? Besides, it was none of the fool's business.

The fool provided laughter at a moment's notice, and a sympathetic ear to which ever royal seemed to need one. The feelings he felt (because that's how you know they're feelings. you feel them) for the princess were almost never considered. The fool buried them--along with many other metaphorical bodies--in a haze of pot smoke and beer and general goofing off. Which, everyone agreed, was for the best. The fool was as good at goofing off as he was at fooling around, and so a delight at parties or other gatherings that had need of energetic and unapologetic frivolity.

This went on for many years. And never did the fool reveal his feelings to anyone. Especially himself. The only tell tale sign that the fool was anything other than the loyal jester that he appeared to be was his friendship. Or rather, how that friendship was applied. For everyone thought that he was the duke's best friend. And why wouldn't they? They drank awful beer together, they got drunk and jumped off things for fun, they saw Barb Wire together. I mean, c'mon. Total besties.

It happened, however, that this was not the case. The truth was, the commoner was the princess's best friend, and she was his. And this only the two of them knew. And they spoke of it almost never. It would take a mighty pull of the tube and a rare moment alone for either one of them to even hint that the one was the other's best friend. They talked and laughed with each other like no one else, but smoked a shit ton of weed together too, so six of one a half dozen of the other, if you get my drift.

And so it went, year after year. The couple going on, the fool staying with them. Until . . . the duke wanted to travel. He wanted to backpack through Europe. He hadn't done it in college. Nothing wrong with that. The fool couldn't afford it, and at the point was attempting to fool people professionally, and the princess was involved in the beginning of her career. But the duke didn't care. He'd go alone, if he had too. And so he and the princess talked and talked. Blah blah blah. And it came to pass that there was no longer a romantic love between them. And so he went. And left the princess alone with the fool.

And the fool, seeing his chance, jumped all over that shit. He confessed his love to the princess and to his delight, she did the same. He emailed the duke at an internet cafe in Belgium. The duke was pretty cool with it. And it's been happily ever after ever since.

Turns out that fool was pretty fucking clever, for a fool.

As you can all see, there is a new widget over there. No there. Right next to the post. At the top. The top. There we go. Juvenile Myositis is something no family should ever have to live with, but many do. I'm not really the person to articulate how frightening a diagnosis of this disease can be for a family. Or how long and hard the fight is against it. Or how there is no cure. For that you need to visit here, here, here, here, and here.

It's a rare disease that afflicts relatively few but affects many. Including this little girl and her family. As written about by her dad, Always Home and Uncool. I'm pretty sure I buffeted whatever readership I have with this cause last year. And now it's here again. Like hurricane season. Let me offer you a deal:

I almost forgot . . . The above mentioned dad, Always home etc., is running--along with his son--his first ever 5k in order to raise money for Cure JM. So please pledge your support. Whatever you can afford. Because this man, he runs like the wind when you consider that the wind has no legs.
Posted by Homemaker Man at 8:44 PM 2 comments: 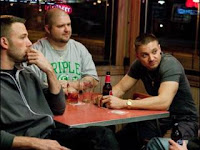 We re-watched the last third of The Town last night. Don't hate.

There was Ben Affleck deftly slinging his Boston accent. There was Boston once again being portrayed as a modern day version of prohibition era Chicago. Violent Irish (in this case) mobsters, shooting it out in broad daylight in front of a really good place to get clam chowdah. That shit never happens around here. We almost never have shootouts. At least not in front of the places where you can get good clam chowdah.

And that accent. And the dialogue. In the movies, at least within a certain socio-economic archetype, the word Fahkin' is unnecessarily prevalent. Ubiquitous, even. Very.

Every pause or salient point is brought home with a "fahkin'."  Everyone in the city is a fahkin' tough guy. It's like punctuation. "I like fahkin' ice cream fahkin cake fahkin cookies fahkin pie.  I gotta huge fahkin' sweet tooth." People here don't talk like that in real life.  Mostly. Basically. At least not all the time.

We watch a show called Falling Skies on TBS. Don't hate. It's post the alien invasion of earth and the humans have formed a resistance. The aliens are these crab/lobster looking things. It has Noah Wiley, but we watch it anyway because we like sci-fi stuff and the first season is set in and around Boston.

The thing is, no one has a Boston accent. Not the worst thing. The acting is shaky enough without throwing a bad accent into it. But I wish someone would make a sci-fi movie with Marky Mark as the hero where he just rips into his Boston accent, Hollywood style.

As he hits the self-destruct button on the mother ship:

You wouldn't sit down for ninety minutes of that if the special effects were good?  Of fahkin' course you would.