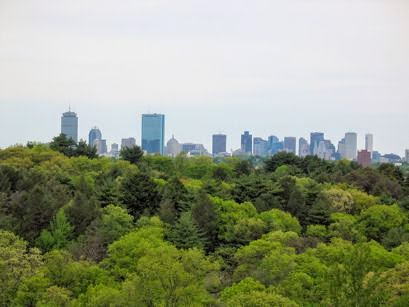 They careened up the hill. Did you know you can careen up a hill? If you're a little kid, it's pretty easy. They careened up the hill like a reverse avalanche . . . well, some did. Some stopped and complained, "my legs hurt, will you carry me?" and their oh so ridiculous request received the loud laughter it so richly deserved.

They reached the top, a screaming mongol horde, the tiny one standing on a granite slab and declaring, "I'm first!"

They reached the top first and attacked the trees, a swarm of sweaty, sandy locusts, the trees shuddering at their approach.

Once the hill was conquered, and I mean conquered, rolled on, jumped on, stick swords swung and clacked and poked, down the hill they careened. This careening seemed much easier, and so all the more frightening.

We, the two dads responsible for inflicting such trauma upon this pristine hill who had moments before thought itself so fortunate--it has a great view of the city, followed our respective broods down, down, down.

Across the street, back into the park on the other side, the stream was their next victim. Never saw them coming. An impossible amount of fish were caught, eaten, or thrown back that day. An unbelievable amount really, considering the tackle consisted of nothing but long thin sticks with leaves stuck on the ends.

Only one wet shoe was worn by one wet foot after our encounter with the stream. Out of ten feet (50 toes!), only one. Remarkable when you consider the odds.

Our walk continued and love was in the air. Thick. One young five year-old declared his love for a seven year old girl and he could not be dissuaded. She was not into it. He did not care.

We came to a great pine where the lower branches spread wide and underneath was the perfect dark playhouse for a group of little Huns. They swept in and up the branches and claimed the darkness for their own.

While we stood in the sunlight and chatted about things the pirates in that tree would not find at all important, a rustling occurred and a seven year-old girl, the pragmatist from earlier, emerged from the darkness swinging an entire bird wing in her hand and crowing, "We found a bird daddy and see how pretty it's feather is it left the whole thing!"

"No no girl put that down, " said her father. I agreed. I looked inside the shelter and saw a burst pile of feathers at the bottom of the tree.

I interrogated, "Who else touched the bird? Did you touch the bird?" Each answered no except for the five year-old boy who loved the seven year-old girl. He had touched it. Of course.

There were many repeated requests to not, "touch your face," which the boy only ignored twice.

We returned to our cars and made our way toward tacos. "Tacos!" demanded the hungry marauders.

Tacos were eaten with gusto, nachos with guacamole. The boy turned to me and took my hand and began yanking at my fingers. He wanted my wedding ring so that he might present it to his nonreciprocal beloved. I declined.