This is the Earth.

A billion years of death and life and death again.

Under my fingernails and in the creases of my hands.

My family works the Earth.

As did our Ancestors.

Ancestors who toiled in The Earth and were rewarded.

Ancestors who worked The Earth and had their efforts rebuffed. Rebuked firmly by barren land.

We take now from The Earth our bounty.

A bounty that feeds us body and soul.

As we, in the end, will feed the Earth's insatiable hunger.

The Earth should have it's cholesterol checked.

Hey Earth, what's your pants size, Jupiter? Earth's so fat it has to borrow belts from Saturn.

So uh yeah, did I mention we built vegetable garden boxes? Was that a little too dramatic? It's because it's our first vegetable garden, and I'm excited. You can tell I'm when I'm excited because everything comes out sounding like a poetry slam (makes sex-time fun). I call it my Def Homemaker Man Def Poetry Def Jam Slam

But yeah, a little melodramatic. Certainly, snipping some thyme for my roast chicken does not a bounty make. It does make good roast chicken, however.

The kids really love it. They love the dirt and the idea of the growing veggies and the ownership of it all. It's very exciting and I'm really looking forward to pulling that first ripe tomato off the vine, taking a juicy, messy bite, handing it to the P-Man, and then watching as he whips it at his sister.

"We made that possible together. As a family." I'll say as I spread my arms and rest my hands lightly on my children's backs. "Now go to time-out."

We're poor but proud New England dirt farmers now. I can feel the dour wisdom flooding my veins as I write.


So that's one of the reasons I've been a bad blogger lately. We've been busy with some other things and I've also had limited computer access.  Will try harder. Will probably fail.  Will not mind that much because will be too busy fending off the local wildlife. Shoo feral kitty. Shoo!

Bipedalism: Is it a choice, or are we just born that way?

I once destroyed an ambulance. A 1980 Ford Econoline.  I was driving it.  Rear ended the shit out of the people in front of me. Ruined the front end and bent the axles. We bought it when we moved one time, my mom and I. I was 16 when I bought it and 17 when I wrecked it. It was the first car I ever owned. I wish I had escalated my car purchases since then. I'd be driving an aircraft carrier by now.

The ambulance still had a lot of the original markings and working lights. Which was totally not a problem for a 17 year old boy with a history of impulse control problems. And car accidents.

We bought it because we were suddenly moving again (which is how we always moved. Suddenly and again.) and we needed something big enough to fit everything into it. Bought it with my money. Destroyed it with my driving skills.

One night, before I killed it for good, I was leaving the restaurant where I was bussing tables at the time and backed in to a Lincoln Continental. Just wiped the smug smile of its silver grill right the fuck off its face. Fluids leaking and spraying from wherever fluids leak and spray. I went inside, told my boss and found the owner at the bar. Short, bald, paunchy, cigar smoking dude wearing a brown leather jacket. A guy like that drove a Lincoln. Crazy, right? I know.

I was freaked. He was pissed. His car was 7 months old.

The kid I had been giving a ride to that night suddenly decided to find another way home which struck me as strange because the damage to the ambulance was minimal. A couple of scratches. Maybe a small dent. The front of the Lincoln was bashed in good. I mean, I think I pretty much demonstrated the fact that no matter what we hit in that ambulance, we were going to be safe. Dude couldn't take it. Shit was too real I guess, man.  Too real.

It kind of hurt my feelings, if you want to know the truth. Felt like it was a direct criticism of my driving ability. What's one little accident in an almost completely empty parking lot where I probably totaled the other car between friends? Work acquaintances really, but still. I was going to let him work the lights and everything.

The ambulance's death crash came about 2 months later. Afterwards, a friend of my mother's was nice enough to give me rides for a while, but that couldn't last. I lived ten miles from work (now cooking at a seafood joint), and even further from her house. She was doing it out of the kindness of her heart and for a little gas money.

I had to figure something else out. So, I decided to buy a bike. I picked a nice, little, silver Raleigh ten speed for about 400 bucks.

Rode that thing 20 miles almost every day for 7 months. Along route 6 just outside of Cape Cod. Lost some weight. Sometimes one of the guys who worked there would throw the bike in the back of his pick-up and drive me about halfway home.  Rode in bad weather and through popped tires. Went head first off the thing once and scraped the front of my helmet along the asphalt for a good five feet. Big fan of helmets.

When I moved to Boston, I eventually lost touch with my bike. Ended up selling it for pretty cheap. Haven't ridden a bike for more than 30 seconds or so in at least 15 years. That is, until this past week. 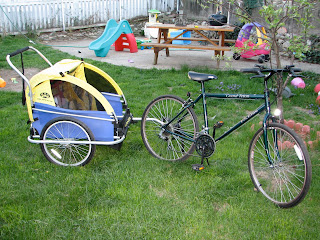 Pretty sweet, right? Big. Pimpin'. I'm going to get the trailer windows heavily tinted and add a purple light to the undercarriage.
The kids love it and I had completely forgotten how much fun bicycling is. Makes me feel like a ten year old girl again. I can't wait to get my pastel streamers for the handle bars.
While my new ride is mad tight, y'all need to feast your peepers on this: 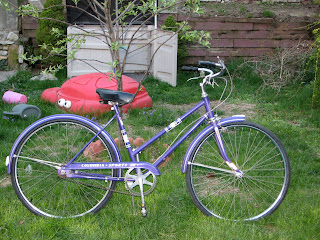 This one is my wife's new whip. So slick. I am filled with admiration and jealousy. Thing is the coolest bike on the block.
This summer is gonna be off da chain.
Pedaling like mad,
HM
Posted by Homemaker Man at 4:12 PM 13 comments: