This Blog's Title and Why the Anonymity/Haiku Sunday

First off, the blog's title. I know that when anyone uses the word "musings" in anything really, but especially a blog title, it probably causes a lot of shrugging and mumbling of the phrase, "hm, this guy must be a little douchy," among those who read it. I mean "musings," really? I should just call it Masturbations from the Big Pink (ooh, dirty!) and be done with it.

But . . . the title is actually a bastardization of Music From Big Pink, which is the title of The Band's first album. It was written entirely in and around a big pink house. So, I hope that makes the title seem a little less pretentious. Maybe it makes it worse. I don't know.

Second: My anonymity. I didn't start out to write this blog anonymously. I've got nothing to hide. But as I was reading blogs and getting ready to start, I came across some blogging tips that suggested anonymity is not a bad idea . And with my wife being a teacher, I said ok and went incognito. The problem is, I have a beautiful family. And I am very proud of them. I want to post pictures of them all the time, but I can't. it is a struggle for me. So I have decided to post likenesses of my family. One time only, never to be shown again. I hope you who read this blog from time to time find them as beautiful as I do: 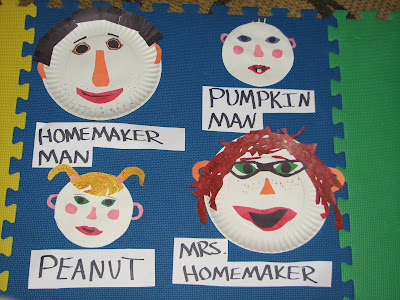 Aren't they beautiful? Did I get anyone? Craft time with my 2-1/2 year old again. My poor wife. That is not an accurate representation of her. She is a beautiful woman with deep and expressive green eyes and full lips and wild and curly auburn hair. My rendition makes her look like a lunatic woman who got into the lipstick and did 6 or 7 heavy-handed laps around the outside of her mouth before finally eating it.

Drove the Zamboni again today. Someday I'll crash right through the boards, out of the building, and cover the entire city in a 1/4 inch layer of ice. BWAHAHAHAHAHA! Haiku time: